Have you ever wished for a superpower? Maybe it would be the ability to fly, or to see through walls, or to be invisible. For a wristwatch, the ultimate super-power is the ability to keep time and not be slowed by outside forces. One of the biggest forces that alters a timepiece’s ability to keep time… magnetism. If any of the mechanical components of your timepiece become magnetized, your timepiece may run fast, slow, or stop altogether. Being anti-magnetic, then, is truly a timepiece superpower. Arguably, nobody does anti-magnetism better than Omega, and the Seamaster Aqua Terra 15000 Gauss was the first watch to solve the magnetism problem in a unique way. 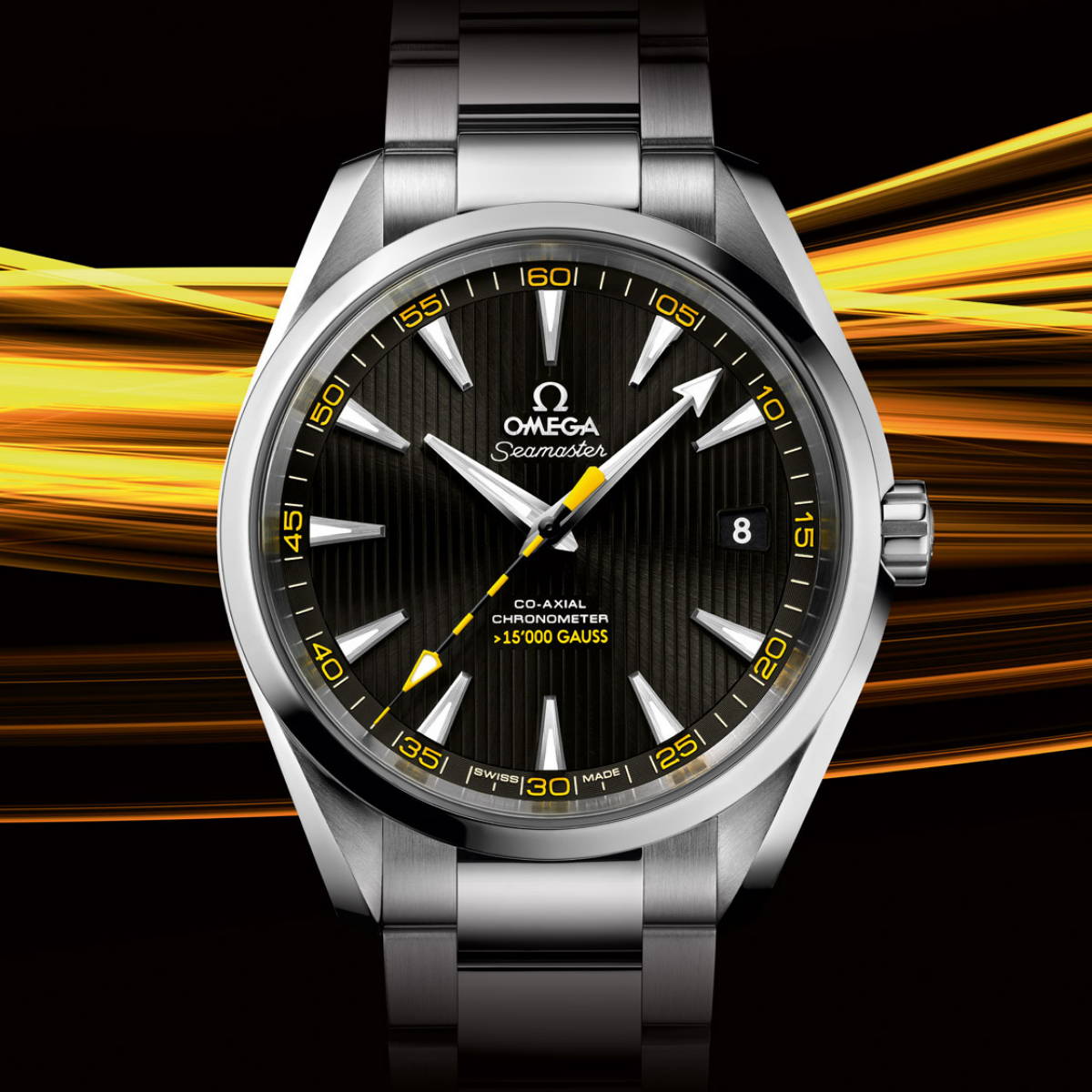 Historically, watchmakers made a watch resistant to magnetic fields by lining the interior of the wristwatch case with an iron shield. This meant that you would never be able to have a transparent case back or any window feature on the dial as this would provide space not shielded by the iron case and thus susceptible to magnetism. If you are thinking, how serious are magnetic fields? The answer is, fairly common. While most of them will not magnetize the entire movement, which would require a professional watchmaker to remedy, if even possible, the more realistic impact is that your timepiece begins to run more slowly or quickly due to magnetic interference. With the need to “shield” the movement to protect it, the watch world has historically been left with very plain watches that exceed normal anti-magnetism standards. Until Omega introduced the Aqua Terra 15000 Gauss.

The first thing you will notice about the Aqua Terra 15000 Gauss is that it looks like any other wristwatch. The 41.5 mm steel case wraps around a lacquered black dial with yellow accents, earning the watch the nickname Bumblebee, and the date window at 3 o’clock is cut to match the triangular angles of the hour markers. The transparent case back is domed scratch-resistant sapphire crystal with anti-reflective treatment on both sides. The transparent case back, along with the notation on the dial, reveals what is truly special about this timepiece, the Omega Co-Axial Calibre 8508. The first non-magnetic, not just anti-magnetic, movement in a timepiece. Calibre 8508 is the result of a multi-year development endeavor by a team of ETA, Asulab, Nivarox FAR, and Omega engineers. Performing to COSC and METAS chronometric specifications (it was invented before METAS), today’s Aqua Terra is a Master Chronometer. So, how did Omega create a watch, wrapped in metal, which is susceptible to magnetic fields, that is anti-magnetic? 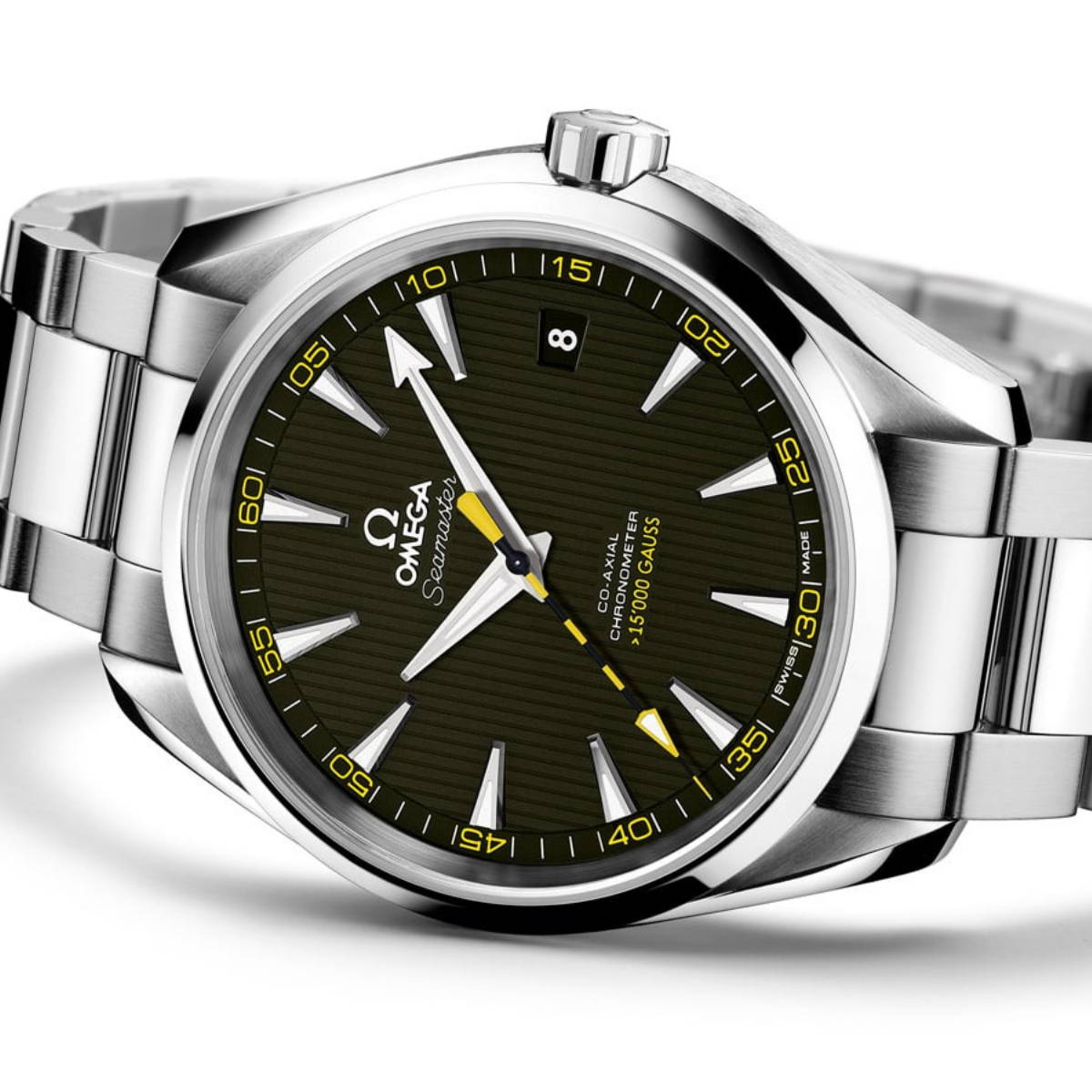 Genius solutions often require thinking outside the box, or in the case of the Omega Calibre 8508 movement, outside an area of the periodic table. Most watch movements are made of metal. Finely crafted, perfectly sculpted little bits of metal joined together to create the complex movement that powers a timepiece. In the construction of the Aqua Terra 15000 Gauss movement, the team determined that there are pivotal parts of the movement that maintain time and are the most susceptible to magnetic interference. These pieces, specifically the hairsprings in the Calibre 8508, are constructed of silicon, making them immune to the forces of magnetic fields and allowing the watch to maintain perfect time. Other key pieces of the movement are constructed of non-ferrous metals, those with anti-magnetic properties which provide further protection to the function of the movement.

Finally, we know you are asking, exactly how strong is a magnetic field of 15000 Gauss? The answer is that the Omega Seamaster Aqua Terra 15000 gauss can withstand approximately the magnetic field of a magnetic resonance imaging (MRI) machine that you would find at the local hospital. Just something to keep in mind when you are looking for your next timepiece and wondering if it can keep up with absolutely anything you can throw at it. The answer for the Aqua Terra 15000 gauss is a resounding yes.