In just a few days, Prince Harry and Meghan Markle will officially be wed and if you’re anything like us you'll be up early Saturday morning watching the magic happen live. With the recent excitement of royal babies and royal engagements, we thought we’d look at some of the engagement rings royal brides have made throughout history.

It took Prince Albert, the Duke of York, three proposals to Lady Elizabeth Bowes-Lyon before she finally accepted. When she said yes, Prince Albert gave her a platinum sapphire engagement ring with diamond accents. It stayed on her finger, along with a Welsh gold wedding band, from 1923 into the 1950s. At that point, the Queen Mum switched from the original sapphire ring to a large pearl ring, also surrounded by diamonds.

The tale of how Lady Elizabeth became the Queen involved a surprise twist. King Edward VIII abdicated his throne in order to marry a twice-divorced American Socialite named Wallis Simpson. The former King presented Simpson an engagement ring including a 19.77-carat emerald, inscribed with the words: “We are ours now 27 x 36.” The numbers represented the date Edward proposed - October 27, 1936. Despite his abdication of the throne, the new couple did not become mere commoners. His brother, King George VI created him Duke of Windsor, and Wallis Simpson became the Duchess.

Princess Margaret, the daughter of King George VI and Queen Elizabeth, was first engaged to Peter Townsend, flying ace in the Royal Air Force. Unfortunately, having been divorced, the Church of England refused to marry the couple and the engagement fell apart. A few years later, Princess Margaret accepted the proposal of photographer Antony Armstrong-Jones. Her “non-traditional” engagement ring was a ruby surrounded by diamonds to look like a rosebud. After their marriage, Antony Armstrong-Jones would be named the Earl of Snowdon.

Prince Charles of Wales presented Lady Diana Spencer with a selection of rings and asked her to choose her favorite. The ring she picked was a 12-carat oval Ceylan sapphire stone, surrounded by 14 solitaire diamonds set in 18-carat white gold. Princess Diana and Prince Charles divorced in 1996, but the ring stayed with her and would often wear the ring she loved up until the day she died. The oval sapphire lived on and became the choice of Diana’s son, Prince William, when he proposed to Kate Middleton.

Prince Andrew took a new path when asking for the hand of Sarah Ferguson: He designed her engagement ring himself. The ring features an oval-cute Burmese ruby, specifically chosen to match his fiancée’s red hair. The ruby was surrounded by diamonds and when the couple was married in July of 1986, the Queen bestowed the title of Duke of York upon Prince Andrew, making Sarah Her Royal Highness The Duchess of York. The couple divorced in 1996.

Kate Middleton met Prince William in 2001, when they were both students at St. Andrews. The couple started dating in 2003, and in October 2010 Prince William finally proposed. The ring he gave her was the sapphire engagement ring worn by his late mother Diana. The story that has been passed around is that the young Prince carried the ring around in his backpack for 3 weeks before he finally popped the question while the two were on a trip to Kenya. The couple married April 29, 2011, and they became the Duke and Duchess of Cambridge. 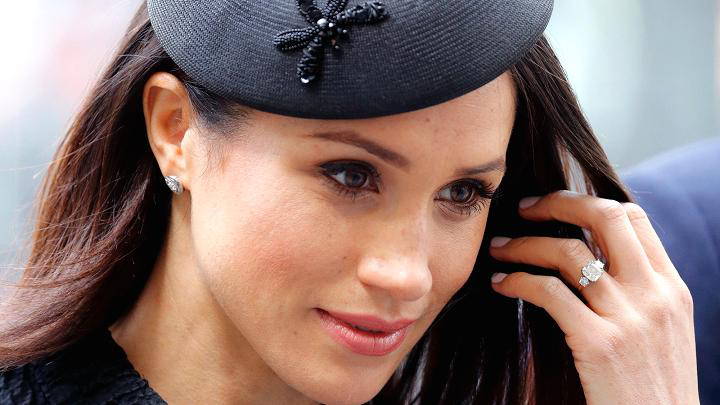 Introduced to each other by a mutual friend, Meghan Markle and Prince Harry started dating in July 2016. The two hit it off immediately. "We met for a drink," says Markle, "and then I think very quickly into that we said, 'Well what are we doing tomorrow? We should meet again.'" Harry proposed at the end of last year with a custom designed three stone ring. The larger center stone was hand selected by the prince from a mine in Botswana - as a reminder their visit during the beginning of their courtship. The other two stones that rest on each side of the larger diamond originally belonged to his mother, Diana and are meant to remind the couple that she is always with them. The diamonds are accented by contrasting yellow gold as it is Meghan’s favorite color metal.

With so many options, we think an engagement ring can be exception with any gemstone at any price point. Take a look at our expanded collections in store in Richmond and Charlottesville.