What do caffeine, innovation, speeds in excess of 250 mph, and competition have in common?

The Air Race scene is a little different: the best racing pilots in the world navigate a course with precision, speed, and unparalleled skill. While this might be a drastic departure from the skies of 1918, the necessity remains for high quality, well-made, precision instruments to assist the best pilots of the day, and Hamilton delivers.

So, what exactly is the Air Race World Championship, and why is Hamilton involved?

The Red Bull Air Race World Championship is the next level of motorsports competition. Featuring fourteen of the best pilots in the world, the World Air Sports Federation accredits the series as the Official World Championship of Air Racing. Using lightweight, agile racing planes, pilots navigate a low-level slalom track as quickly as possible while also demonstrating ingenuity and precision control of their aircraft. Twenty-five-meter-high air-filled pylons demarcate the 6 km (3.7 mile) course, which sees pilots reaching speeds in excess of 250 mph and enduring strains reaching 10G forces. The global competition is comprised of eight races, with the winner being crowned Red Bull Air Race World Champion. 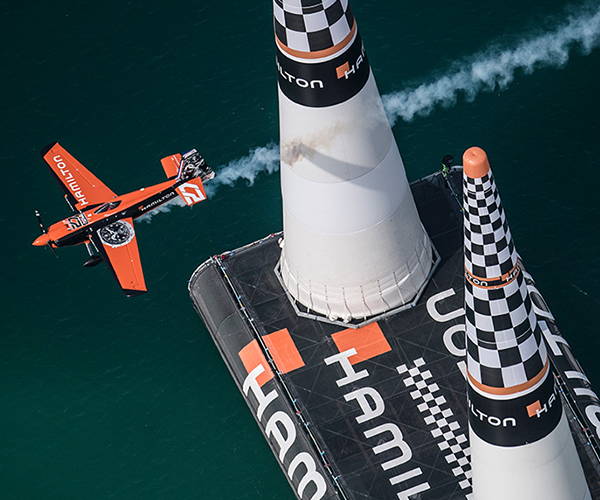 Aviation is not new to the Hamilton brand. Hamilton was the official watch of TWA, Eastern, United, and Northwest Airlines in the 1930s, well after they were used to keep the first American airmail service on schedule. Hamilton was further engrained in the history of American aviation when their instruments helped usher in the era of coast-to-coast air services. Commercial flight in the modern age had arrived, and Hamilton instruments and timepieces were at the center of the explosion.

Today, Hamilton is found on the wrists of pilots from around the world. Hamilton wristwatches are standard equipment for Canada’s SnowBirds, South Korea’s 123 Squadron, Spain’s Patrulla Aspa, and the Netherland’s F-16 Demo Team, just to name a few. Found on the wrist of elite pilots, Hamilton uniquely understands the needs of top caliber pilots and the watch functions which matter most in flight. Specialty timepieces for pilots are the bread and butter for Hamilton, such as the Khaki Takeoff for Air Zermatt, the elite transport and rescue helicopter squadron of the Alps. 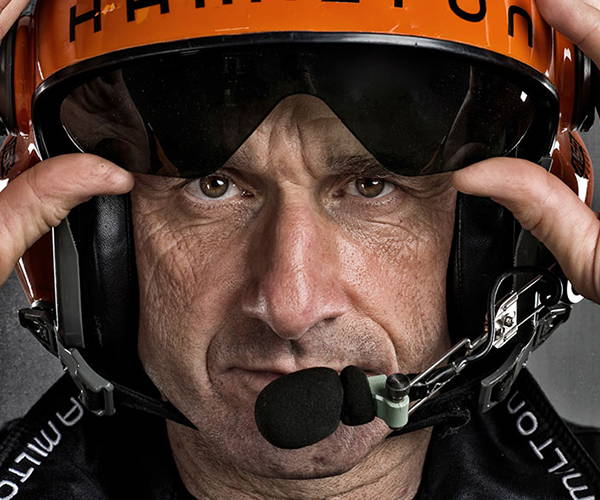 The commitment to elite pilots extends beyond air shows and rescue squadrons for Hamilton. Since 2005 they have counted Nicolas Ivanoff among their brand ambassadors. Ivanoff, known as the Quick Corsican, has been capturing Top 10 finishes in global aerobatic competitions for the last two decades. For twenty years he has been thrilling audiences and pushing the limits of his aircraft.

Now, with Hamilton as an official team sponsor, Ivanoff and Team Hamilton are pushing the envelope once again. With his Edge 540 aircraft undergoing modifications to bring the weight down and increased performance through aerodynamic improvements, Team Hamilton is making their mark on the Red Bull Air Race Series. For 2018, Hamilton has welcomed three new pilots as ambassadors. Spanish ace Juan Velarde, Canadian Pete McLeod, and Italian Dario Costa are the newest members of the Hamilton team. With a commitment to precision, style, and reliability, it’s no wonder Hamilton is consistently placed on the wrist of top pilots from around the world. 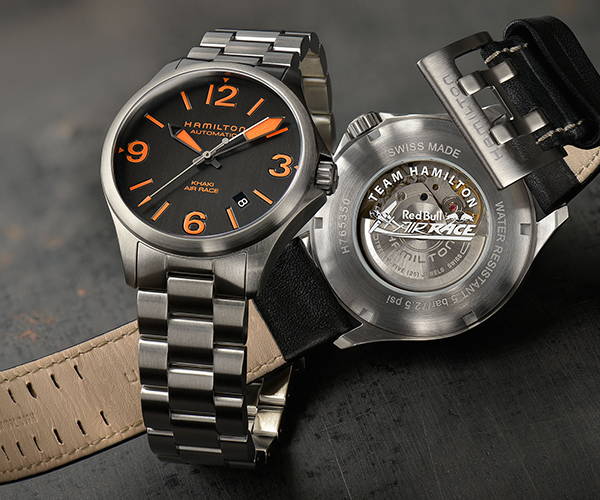 The Red Bull Air Race World Championships started in February in Abu Dhabi. With stops in France, Japan, Russia, Hungary, and Austria before ending the regular season in Indianapolis, the series will conclude with a race in a yet-to-be-announced city in Asia. In the meantime, stop by our Short Pump or Charlottesville stores and see the limited edition Air Race 42mm made to celebrate the new partnership.